Vitiligo is a long-term condition where pale white patches develop on the skin. It's caused by the lack of melanin, which is the pigment in skin.

Vitiligo can affect any area of skin, but it commonly happens on the face, neck and hands, and in skin creases.

The pale areas of skin are more vulnerable to sunburn, so it's important to take extra care when in the sun and use a sunscreen with a high sun protection factor (SPF).

The areas of skin most commonly affected by vitiligo include:

It can also sometimes develop where there are hair roots, such as on your scalp. The lack of melanin in your skin can turn the hair in the affected area white or grey.

Vitiligo often starts as a pale patch of skin that gradually turns completely white. The centre of a patch may be white, with paler skin around it. If there are blood vessels under the skin, the patch may be slightly pink, rather than white.

The edges of the patch may be smooth or irregular. They're sometimes red and inflamed, or there's brownish discolouration (hyperpigmentation).

Vitiligo does not cause discomfort to your skin, such as dryness, but the patches may occasionally be itchy.

The condition varies from person to person. Some people only get a few small, white patches, but others get bigger white patches that join up across large areas of their skin.

There's no way of predicting how much skin will be affected. The white patches are usually permanent.

There are 2 main types of vitiligo:

In rare cases, it's possible for vitiligo to affect your whole body. This is known as universal or complete vitiligo. 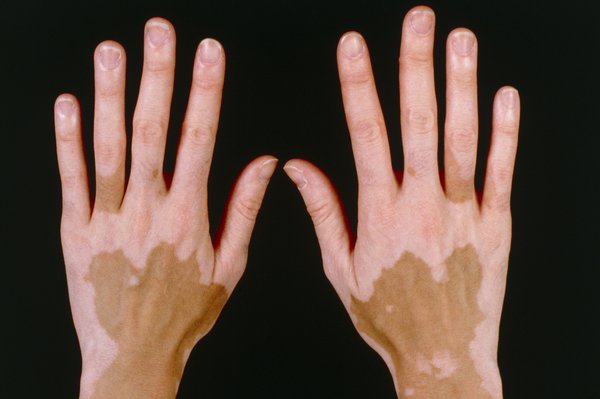 In non-segmental vitiligo (also called bilateral or generalised vitiligo), the symptoms often appear on both sides of your body as symmetrical white patches.

Symmetrical patches can appear on the:

Non-segmental vitiligo is the most common type of vitiligo, affecting around 9 in 10 people with the condition. 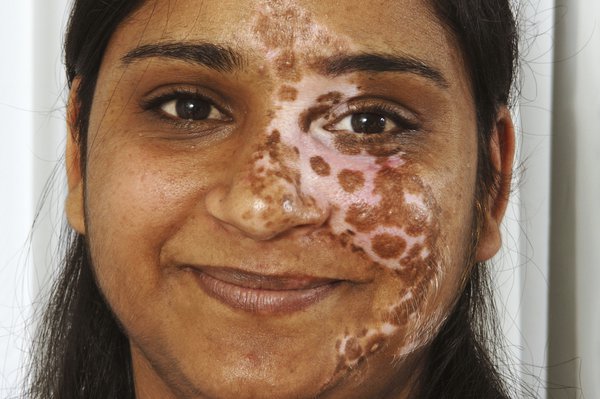 Picture of a woman with segmental vitiligo affecting the face

In segmental vitiligo (also known as unilateral or localised vitiligo), the white patches only affect one area of your body.

Segmental vitiligo is less common than non-segmental vitiligo, although it's more common in children. It usually starts earlier and affects 3 in 10 children with vitiligo.

Vitiligo is caused by the lack of a pigment called melanin in the skin. Melanin is produced by skin cells called melanocytes, and it gives your skin its colour.

In vitiligo, there are not enough working melanocytes to produce enough melanin in your skin. This causes white patches to develop on your skin or hair. It's not clear exactly why the melanocytes disappear from the affected areas of skin.

Non-segmental vitiligo (the most common type) is thought to be an autoimmune condition.

In autoimmune conditions, the immune system does not work properly. Instead of attacking foreign cells, such as viruses, your immune system attacks your body's healthy cells and tissue.

If you have non-segmental vitiligo, your immune system destroys the melanocyte skin cells that make melanin.

Vitiligo is also associated with other autoimmune conditions, such as hyperthyroidism (an overactive thyroid gland), but not everyone with vitiligo will develop these conditions.

You may be at increased risk of developing non-segmental vitiligo if:

Segmental vitiligo (the less common type) is thought to be caused by chemicals released from the nerve endings in your skin. These chemicals are poisonous to the melanocyte skin cells.

It's possible that vitiligo may be triggered by particular events, such as:

Vitiligo is not caused by an infection and you cannot catch it from someone else who has it.

A doctor will be able to diagnose vitiligo after examining the affected areas of skin.

They may ask you if:

If available, the doctor may use an ultraviolet (UV) lamp called a Wood's lamp to look at your skin in more detail. You'll need to be in a dark room and the lamp will be held 10 to 13cm away from your skin.

The patches of vitiligo will be easier to see under UV light, which will help the GP distinguish vitiligo from other skin conditions, such as pityriasis versicolor (where there's a loss of pigment due to a fungal infection).

A blood test may also be needed to check how well your thyroid gland is working.

If vitiligo is severe or making you unhappy, you may want to consider treatment.

The white patches caused by vitiligo are usually permanent, although treatment options are available to reduce their appearance.

If the patches are relatively small, skin camouflage cream can be used to cover them up.

Steroid creams can also be used on the skin to restore some pigment, however long-term use can cause stretch marks and thinning of the skin

If steroid creams do not work, phototherapy (treatment with light) may be used.

Although treatment may help restore colour to your skin, the effect does not usually last. Treatment cannot stop the condition spreading.

Vitiligo can sometimes cause other problems.

Because of a lack of melanin, your skin will be more vulnerable to the effects of the sun. Make sure you use a strong sunscreen to avoid sunburn.

Problems with confidence and self-esteem are common in people with vitiligo, particularly if it affects areas of skin that are frequently exposed.

Support groups can provide help and advice and may be able to put you in contact with other people with vitiligo. A GP may suggest a group in your local area.

The charity The Vitiligo Society is also offers advice and support.