Warfarin is a type of medicine known as an anticoagulant, or blood thinner.

It makes your blood flow through your veins more easily. This means your blood will be less likely to make a dangerous blood clot.

Warfarin is used to treat people who have had a previous blood clot, such as:

It's also used to prevent blood clots if you're at high risk of having them in the future.

This includes people with:

Warfarin is only available on prescription. It comes as tablets and as a liquid that you swallow.

When taking warfarin, you need to have regular blood tests. It's important to keep having these tests at the times you're advised during coronavirus.

It's also important to tell your doctor straight away if you take warfarin and have tested positive for coronavirus or have coronavirus symptoms.

Who can and can't take warfarin

Warfarin can be taken by adults and children.

Warfarin is not suitable for some people. Tell your doctor if you:

How and when to take it

The usual warfarin dose is 10mg a day for the first 2 days, then between 3mg and 9mg a day after that.

Warfarin tablets come in 4 different strengths. The tablets and the boxes they come in are different colours to make it easier for you to take the right dose.

The strengths and colours are:

Your dose may be made up of a combination of different coloured tablets.

Warfarin also comes as a liquid, where 1ml is equal to a 1mg (brown) tablet.

Warfarin liquid comes with a plastic syringe to help you measure the right amount.

How to take it

It's very important to take warfarin as your doctor advises. Take it once a day at about the same time.

It's usual to take warfarin in the evening. This is so that if you need to change the dose after a routine blood test, you can do this the same day rather than waiting until the following morning.

Warfarin does not usually upset your stomach, so you can take it whether you have eaten recently or not.

How long to take it for

If you have had a blood clot in your leg or lungs, you'll probably take a short course of warfarin for 6 weeks to 6 months.

If you take warfarin to reduce your risk of having a blood clot in future or because you keep getting blood clots, it's likely your treatment will be for longer than 6 months, maybe even for the rest of your life.

Will my dose go up and down?

Your warfarin dose may change often, especially in the first few weeks of treatment, until your doctor finds the dose that's right for you.

Why do I have blood tests?

The aim of treatment with warfarin is to thin your blood but not stop it clotting completely. Getting this balance right means your dose of warfarin must be carefully monitored.

You'll have a regular blood test called the international normalised ratio (INR). It measures how long it takes your blood to clot. The longer your blood takes to clot, the higher the INR.

Most people taking anticoagulants have a ratio of between 2 and 3.5. This means their blood takes 2 to 3.5 times longer to clot than usual.

You'll have the blood tests at your GP surgery or local hospital's anticoagulant clinic.

If your blood test results are stable, you might only need a blood test once every 8 to 12 weeks. If it's unstable or you have just started on warfarin, you might need to have a blood test every week.

The yellow book and alert card

When you start taking warfarin, you may be given a yellow book about anticoagulants.

This explains your treatment. There's also a section for you to write down and keep a record of your warfarin dose.

It's a good idea to take your yellow book with you to all your warfarin appointments.

You'll also be given an anticoagulant alert card. Carry this with you all the time.

It tells healthcare professionals that you're taking an anticoagulant. This can be useful for them to know in case of a medical emergency. 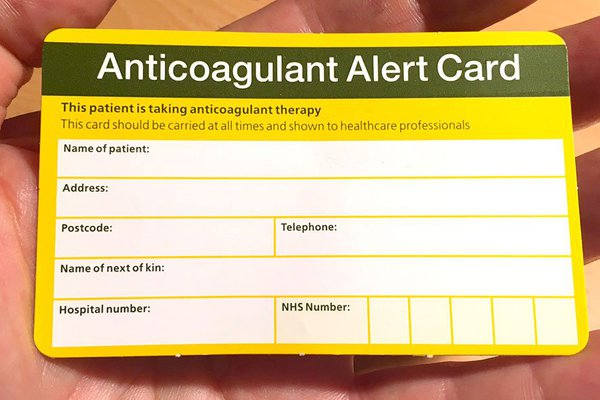 Picture of the front of an anticoagulant alert card

If you need any medical or dental treatment, show your anticoagulant alert card to the nurse, doctor or dentist beforehand.

This includes before you have vaccinations and routine sessions with the dental hygienist.

Your doctor may advise you to stop taking warfarin or reduce your dose for a short time before your treatment.

If you have lost your alert card or were not given one, ask your doctor or anticoagulant clinic.

What if I forget to take it?

It's important to try to remember to take your warfarin on time.

It's not a problem if you occasionally forget to take a dose at the correct time.

But if you forget often, your blood could be affected - it might become thicker and put you at risk of having a blood clot.

If you miss a dose of warfarin, write it down in your yellow book.

Take the missed dose as soon as you remember.

If you do not remember until the next day, skip the missed dose and take your normal dose at the usual time.

If you often forget doses, it may help to set an alarm to remind you.

You could also ask your pharmacist for advice on other ways to help you remember to take your medicine.

If you're worried, contact your anticoagulant clinic or doctor.

What if I take too much?

If you take an extra dose of warfarin by accident, call your anticoagulant clinic straight away.

You may need to change your next dose of warfarin or have a blood test.

If you take more than 1 extra dose of warfarin, you're at risk of serious bleeding.

Call your doctor or anticoagulant clinic, or go to A&E, if you take more than 1 extra dose

If you need to go to hospital, take the warfarin packet or leaflet inside it, plus any remaining medicine, with you. If you have a yellow book, take that too.

Bleeding and what to do about it

While warfarin has enormous benefits, the downside is that it can make you bleed more than normal.

This is because while you're taking warfarin, your blood will not clot as easily.

You're more likely to get bleeding problems in the first few weeks of starting warfarin treatment and when you're unwell - for instance, if you have flu, are being sick (vomiting) or have diarrhoea.

Apart from the risk of bleeding, warfarin is a very safe medicine. It's safe to take for a long time, even many years.

It's usual to bleed more easily than normal while you're taking warfarin.

This type of bleeding is not dangerous and should stop by itself.

If it happens, keep taking the warfarin, but tell your doctor if the bleeding bothers you or does not stop.

Things you can do to help yourself

What you can do to prevent bleeding

While you're taking warfarin, be careful when you do activities that might cause an injury or a cut or bruising.

It can help to:

Occasionally, you can have serious bleeding from taking warfarin.

This can be dangerous and needs urgent medical attention.

Stop taking warfarin and call your doctor or anticoagulant clinic, or go to A&E, now if you get:

These are symptoms of serious bleeding.

Like all medicines, warfarin can cause side effects, although not everyone gets them.

These side effects are usually mild, but talk to your doctor or pharmacist if these symptoms bother you or do not go away:

Call a doctor straight away if you develop any of these serious side effects:

In rare cases, warfarin can cause a serious allergic reaction (anaphylaxis).

You could be having a serious allergic reaction and may need immediate treatment in hospital.

These are not all the side effects of warfarin.

For a full list, see the leaflet inside your medicines packet.

You can report any suspected side effect to the UK safety scheme.

How to cope with side effects

What to do about:

Advice about food and drink

It's very important to keep your diet stable. This means your dose of warfarin is more likely to stay the same.

Any big changes in what you eat or drink can change how your body responds to warfarin.

Speak to your doctor or nurse before changing what you eat - for example, before you go on a diet to lose weight.

Foods containing a lot of vitamin K can interfere with how warfarin works.

It's important that you eat foods containing vitamin K, so rather than leaving them out of your diet, make sure you eat similar amounts of them regularly.

This will mean the level of vitamin K in your blood stays fairly constant and makes it more likely that your INR level stays stable.

Do not drink cranberry juice, grapefruit juice or pomegranate juice while you're taking warfarin. It can increase the blood-thinning effect of your medicine.

Warfarin is not normally recommended during pregnancy.

It can be harmful to the baby, particularly during the first 12 weeks of pregnancy.

Warfarin is generally safe to take while breastfeeding.

Tell your doctor if you're:

Cautions with other medicines

Many medicines and supplements can interfere with warfarin. This can make you more likely to have bleeding.

You might need a blood test to check the other medicine is not affecting how your blood clots.

If you're taking warfarin, tell your doctor before starting to take these medicines:

It's safe to take paracetamol while you're on warfarin.

Taking more paracetamol than this may make your blood slower at clotting. This puts you at risk of bleeding.

If you're still in pain after taking paracetamol for 3 or 4 days, speak to your pharmacist or doctor.

Do not take aspirin and ibuprofen while you're taking warfarin unless a doctor has said it's OK to. They increase the chance of bleeding.

Do not take St John's wort, the herbal remedy for depression, while you're taking warfarin.

It can increase your risk of side effects.

Tell your doctor or pharmacist if you're taking any other medicines, including herbal remedies, vitamins or supplements.